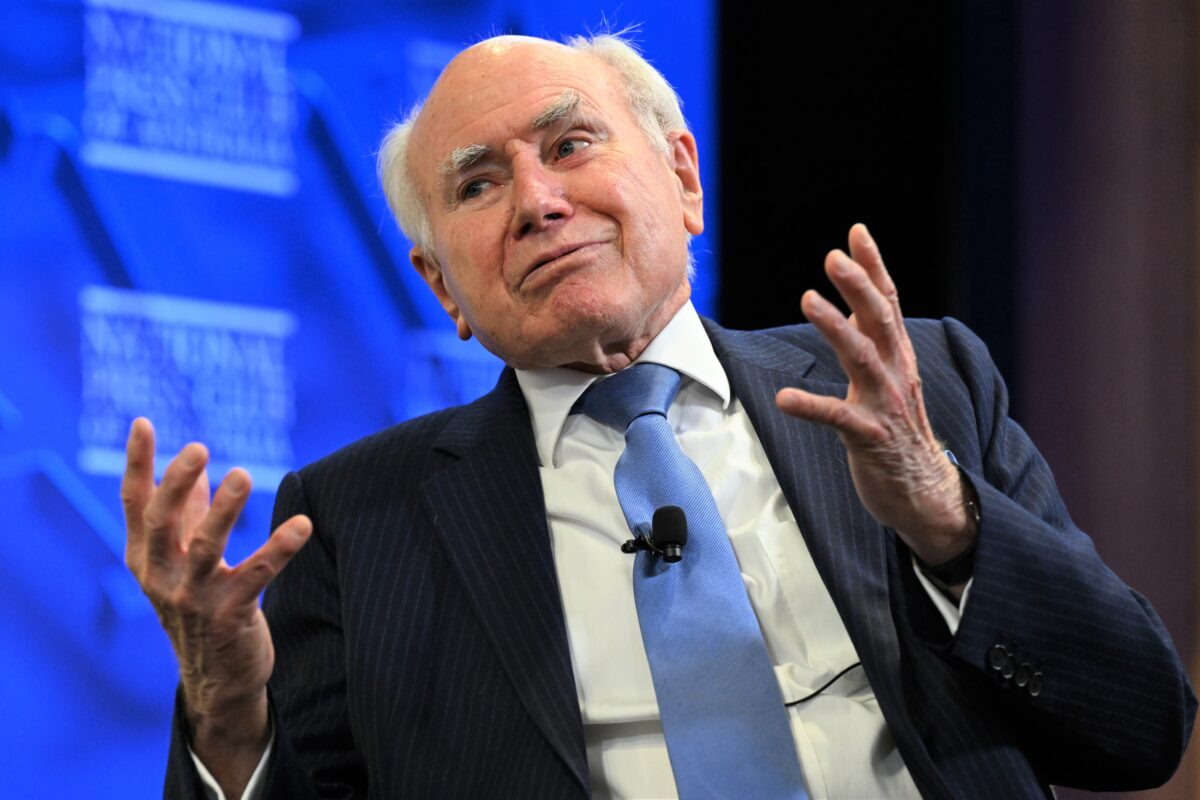 The season’s finale of “The ABC Of” program, televised on Aug. 2, featured an interview with former Australian Prime Minister John Howard. Conducted by actor David Wenham, it enabled Howard to reflect on his remarkable career as a politician. Howard served in office from 1996 to 2007 making him the most successful prime minister in the last 50 years and the second longest in Australian history, after Robert Menzies.

Wenham explained that he proposed to trace Howard’s rise from the middle of the 1960s to his eventual removal from power in 2007. The program used archival material to reconstruct Howard’s career from 29,266 pieces of information. Howard to quipped that this was more than the number of votes he received in some elections.

By any standard, it was a captivating interview because John Howard frankly and openly answered all the questions which were asked of him. He believed he lost the election in 2007 because people simply wanted a new bunch to come in. He also lost his own seat of Bennelong—held for 33 years—to Labor’s Maxine McKew, who was drafted to derail Howard’s ambitions and secure the election of Kevin Rudd.

The interview showed archival footage of Howard’s campaign in 1966 for Liberal MP Tom Hughes, his first election as a Member of Parliament, elevation to treasurer under Prime Minister Malcolm Fraser, his first leadership period and subsequent loss to Andrew Peacock, which resulted in Howard’s famous prediction that “Lazarus with a triple bypass” is not likely to return to the leadership. But he did return when he took over the Liberal Party leadership in 1995, subsequently followed by an electoral victory in 1996.

During his time as prime minister, he had to deal with the Port Arthur massacre, which occurred on April 28-29, 1996. It led to the adoption of stringent gun control laws, including banning of automatic and semi-automatic weapons. Howard was visiting Washington D.C. when the 9/11 attacks occurred. This was followed by the Bali bombings in Kuta in 2002 and the London tube attacks in 2005. He intervened in the East Timor crisis of 1999, which precipitated the independence of Timor Leste.

However, what stood out in the interview is the “common sense” approach to the political challenges.

Howard’s “common sense” approach could be seen in his response to the Port Arthur massacre. The strict gun control laws displeased various sections of the Australian polity, especially in the bush. But he resisted the demands of detractors who wanted to be exempted from the application of the legislation. However, Howard felt that, once you start to carve out exemptions and exceptions, then the overall efficiency, transparency, and integrity of the scheme would be irreparably diminished.

Another example is his refusal to offer a public apology to Australia’s Aboriginal and Torres Strait Islander population. He argued that it is inappropriate for the present generation to apologise for the misdeeds of earlier generations. This is based on the idea that an apology trashes the historical achievements of previous generations and benefits those who have never been discriminated against, while penalising people who have never discriminated.

High Turnover Since the Howard Era

His longevity in politics was a major discussion point in the interview. Howard served as prime minister for almost 12 years. In the 15-year period between 2007 and 2022, the prime minister of Australia has changed six times—Kevin Rudd, Julia Gillard, Kevin Rudd again, Tony Abbott, Malcolm Turnbull, Scott Morrison, and now Anthony Albanese.

Howard was asked to provide an explanation for the high turnover of prime ministers and governments since he left office—he blamed “identity politics.” Politicians often focus on a single issue, for example, climate change, inflation, or Indigenous recognition in the Constitution, and fail to take a holistic view of their leadership duties. This is an unfortunate trend involving politicians who frantically respond to focus groups or implement the woke agenda of Australia’s progressive illiberal elites.

The far-fetched claims of single-issue politicians is incompatible with “common sense.” Howard provided an example: while climate change is a legitimate governmental concern, to blame all natural disasters, like floods and fires, on climate change reveals a lack of common sense on the part of climate change doomsayers.

Common sense suggests that there are other scientific explanations for the regular occurrence of natural disasters. In any event, Howard insisted that as a politician, it is necessary to always consider the consequences of government policy on the livelihoods of Australians who rely on natural gas and clean coal technologies to make a living.

Howard indicated towards the end of the interview that he remains optimistic about the future of the country because Australians are a robust people who will make the right decisions for this country. However, his optimism is more an expression of hope rather than an accurate prediction of future conduct.

Indeed, the current generation of politicians is intimidated by the woke agenda of the progressive elites, now firmly entrenched in the bureaucracy, universities, and even in the health industry. The calamitous violations of people’s human rights, ruthlessly enforced lockdowns, vaccine mandates, loss of jobs and economic malaise, coupled with the medical neglect and disinformation during that period are indicative of the type of society that Australia could potentially become in the future if politicians lack flexibility and common sense.

At present, Australia is slowly edging towards such a nightmarish scenario, promoted by governments that implement an agenda that is devoid of “common sense.” But in final analysis, people deserve the government they vote into power.

Gabriël A. Moens AM is an emeritus professor of law at the University of Queensland, and served as pro vice-chancellor and dean at Murdoch University. In 2003, Moens was awarded the Australian Centenary Medal by the prime minister for services to education. He has taught extensively across Australia, Asia, Europe, and the United States. Moens has recently published two novels “A Twisted Choice” (2020) and “The Coincidence” (2021).

Hercules and the Tyrants of Babylon (1964)